I am a London based artist and print maker. I work in paint, drawing and print. My work tends to incorporate subjects and themes which I encountered during my prior working career. My technical knowledge allows me to produce works which have a unique behind the scenes perspective of places and objects. I am keen to promote science and technology via my art and often the subjects of my work are places or structures which are notable within this sector. 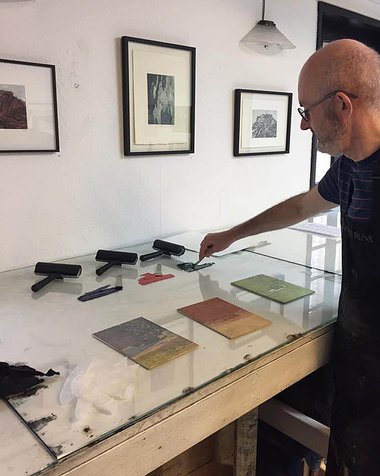 My first career was in engineering and project management, the majority of my experience was in railway projects, including those with London Underground and on the East London Line.

I have been studying art since retiring from work in 2014. In 2014 I did the Foundation course at the Art Acadmey London graduating in July 2015. In September 2015 I began studying again at the Art Acadmey, this time doing the Fine Art Diploma, from which I graduated in December 2020.

While at the Art Academy London I have worked as a Print Associate helping to run and maintain their print facility.

I have been part of the following joints shows:

After a busy period of shows plus an open studio event it time to think about some new projects.